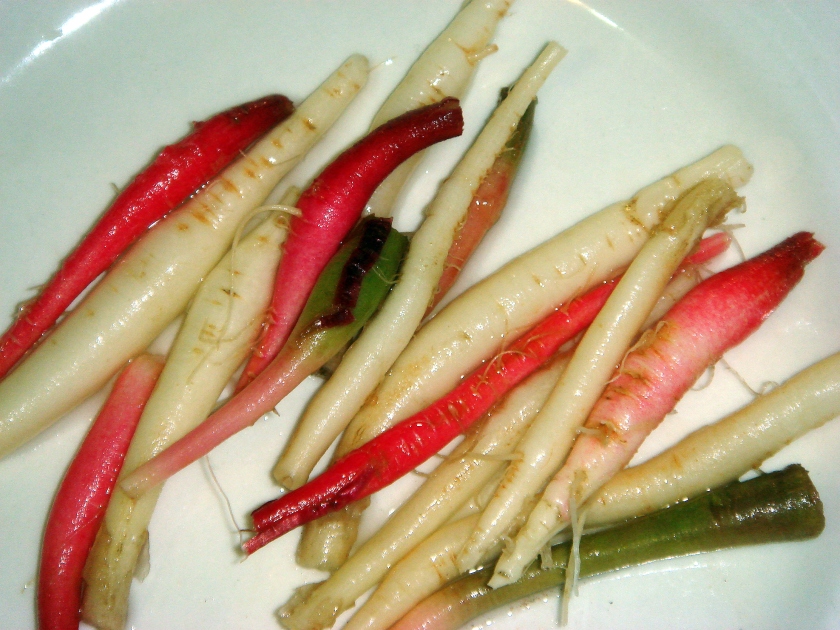 And it just turns out it came dressed in Valentine’s Day colors.

It’s kind of pitiful, though.  But we did eat these little radish thinnings, me and F. and my sis who was visiting.  The largest radish was about the size of my pinkie finger, but the tastes were full-bodied.

There were a few more that we ate before I said, “Wait, stop, let me get my camera!”  My sister and F. have a shared love of radishes, and both of them were in alt over the Daikons (ivory), which is why none of the really big ones survived until the photo shoot.

My sis was also a fan of the China Rose radishes (neon pink), saying they had a hint of sweet taste above their main spicy zing.  She declared them the most interesting, complex-flavored radishes she’d ever tasted.  F. thought they were too mild.  (Big surprise.)

When I told them that fully mature examples are supposed to be nearly baseball-sized, my sister began to earnestly root for the remainder in my patch to reach maturity.  There are probably about 18 left in the ground.  I tried to give the plants in that little row lots of extra space, as it surely takes some room to develop a root that fat.

Nobody approved of the taste of the Misato Rose radishes (green).  They had a strange, earthy taste that did not make you want to take a second bite.  We all agreed they probably haven’t had enough time to develop properly, as these were the smallest of the thinned babies.  I’d rather blame the grower (moi) than the plant — at least until facts prove otherwise.  Further taste tests are scheduled for March, or possibly April, depending on their recovery rate.

Meanwhile, after speaking to a local farmer this weekend, I learned that autumn-sown radishes often overwinter in this part of South Carolina, and if I had known, I might have had a real harvest by now.  This winter having been particularly mild, I might have even planted a second or third round in November and early December, and if thinned properly, been eating radishes for New Year’s Day.

They grow slowly in the cold, it’s true.  But they still grow.

I’m feeling a bit like that right now, as if the winter has slowed down all of my processes, including the growth of my character.  The radishes remind me that even when it doesn’t show, there is growth going on below the surface, even if it is of the slow and gentle variety.

Daphne over at Daphne’s Dandelions is hosting Harvest Monday, a blog carnival in which I hope to be able to participate more often as the season progresses.  The first harvest of 2010, such as it is, is my first opportunity. I’m excited to join in as I frankly love harvest photographs.  There is something about all of that bounty spilling out of its container, all the various colors and forms, all the textures, that just gets to me.

Even before I had a blog, I insisted on photographing nearly every harvest last summer.  (Except for those itty-bitty ones where I’d run outside for a handful of basil, or nip out to the back porch to pinch a few chives to snip over the baked potatoes, or dash outside to pluck a single, sun-warm tomato for lunch, or just stand barefoot in the garden eating a raw okra pod… mmm….)

Abbie of K-Town Homestead recently wrote that “[…] a close-up picture of a dew-kissed organic cabbage is just never going to get my blood flowing the way it does when I ogle the impeccably designed landscapes featured in Martha Stewart Living.”  (And it’s a great post.  I highly recommend Abbie’s blog in general; the writing is top-notch.)

Yet Abbie and I fall on opposite sides of the spectrum on this one.  A dew-bright cabbage will draw my attention first, even if it’s planted in a bed of beautiful flowers.  I even like pictures of onions growing — which I have been assured is a strange taste.

If you happen to feel similarly about enjoying the harvest vicariously through photographs, or if you like learning the details of how people are growing their own food, or even if you’re just a little curious, stop by Daphne’s Dandelions and check out some of the posts from food-growing bloggers around the world.